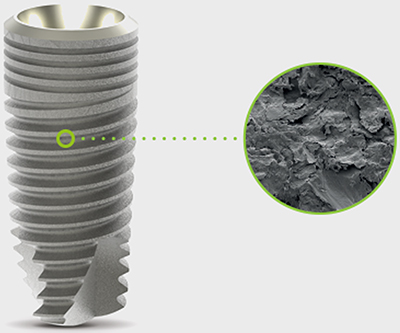 The ideal surgical outcome of a dental implant is stability and a sustained connection to surrounding bone. Achieving this outcome relies on a number of factors, not the least of which is the formation of a tight, sealed bond between implant and bone. Implant design, and specifically the surface properties of the implant, have a profound impact on osseointegration, and several clinical studies support this {1,2}.

Various cell culture experiments have demonstrated that the modification of surface architecture has a positive impact on cell proliferation and the cytokine and growth factor production of osteoblast cells {3,4}. Animal studies support these results, by showing a high correlation between increased surface roughness and the level of bone-implant contact {5}. Finally, clinical trials show the use of implants with a rough surface accelerate the apposition of osteoblasts on the implant surface {6,7,8}.

Certain aspects of surface architecture, such as depth, extension and average roughness of the pores, are of great importance in surface treatments as they not only influence the cellular orientation, but also contribute to improving force transmission. A rough surface architecture also raises the concentration of PGE2, BMP-2 and TFG-ß on the surface of the implant, whereby the pores or depressions in the surface form a solid matrix for the absorption and retention of osteogenic proteins. Surface topology also exerts a major influence on the quality and kinetics of osseointegration {9}, and hydrophilicity promotes a reduction in surface tension, improving cellular adhesion.

I. Structure and Surface

DUOTex® is a macro- and microstructured surface generated via blasting with hydroxyapatite [HA] powder and subsequent acid etching. The DUOTex® surface is comprised of titanium and titanium oxide, according to ISO 5832-2, and is biocompatible. From a chemical standpoint, the surface is not modified and shows no contamination from the HA powder.

The contact angle of a liquid on a material informs the extent of the contact the liquid has with said material. The average water contact angle of the DUOTex® surface is 100°, or slightly hydrophilic. This assists in reducing surface tension, thus improving cellular adhesion.

DUOTex® surfacing is free of organically or inorganically unstable compounds, and has a shelf life of at least 5 years at in its original packaging at normal storage temperatures.

A. In Vitro Cultivation of Cells 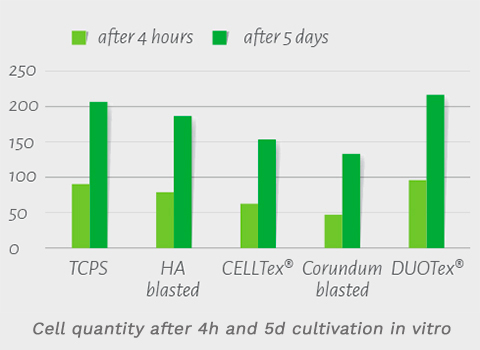 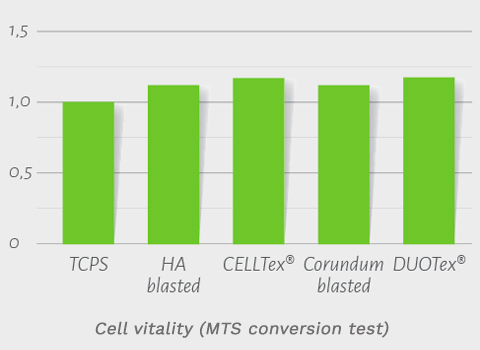 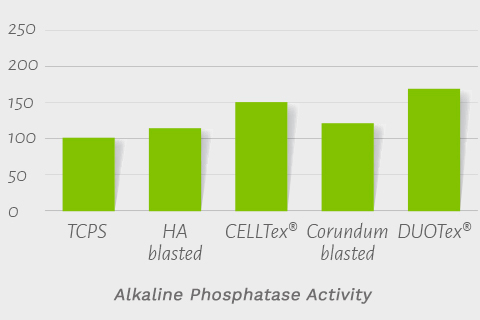 B. Cultivation of Differentiated Cell Types on DUOTex®

To further investigate biocompatibility, an osteosarcoma cell line (MG63) and human dermal endothelial cells (HDMEC) were cultivated for several days on the DUOTex® surface. The morphology of the various cells were then analyzed and evaluated with vital nuclear staining and SEM images. In nuclear staining, the cell nuclei are stained blue and the cytoplasm of the cells green. Non-vital cells show a clear red coloration. 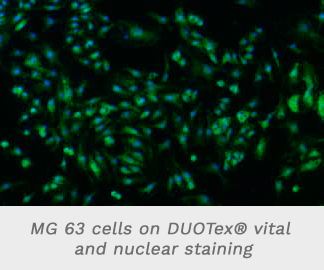 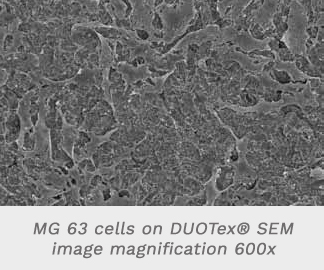 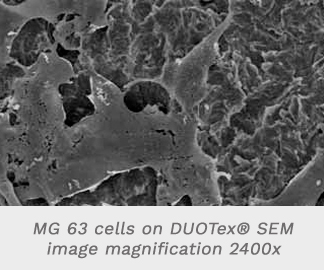 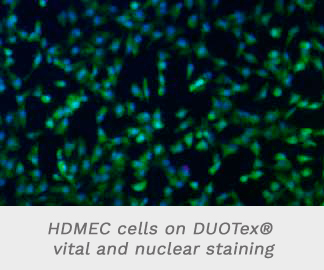 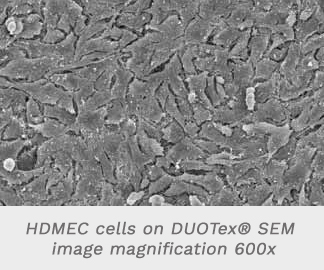 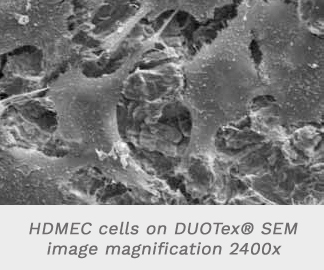 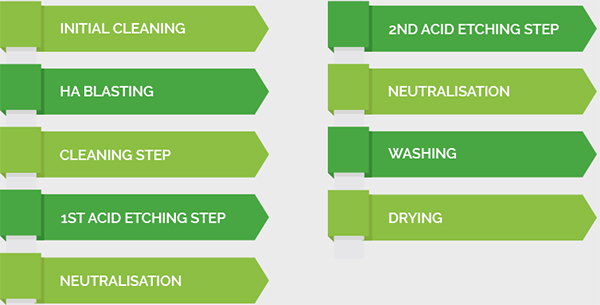 Due to exposure to acids in the production process, the concentration of acid ions on the DUOTex ® surface were tested via residue analysis (NORDUM Institute für Umwelt und Analytik GmbH & Co. KG). The results showed residual acid ion values below the limit of determination, indicating no detectable levels of residual acid ions were found on the implant surface {19}. An EDX analysis performed on the DUOTex®-treated implants showed pure titanium with a non-chemically modified surface and no impurities {20}.

In addition to measurements for surface roughness, surface structure is also measured. SEM images, or scanning electron microscopy, with 2000 X magnification are produced and implants are tested for homogeneous surface structure without flaws or irregularities (Fig. 5a-c). 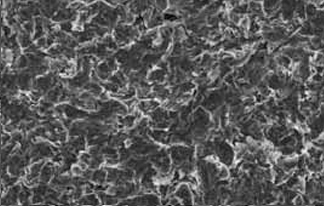 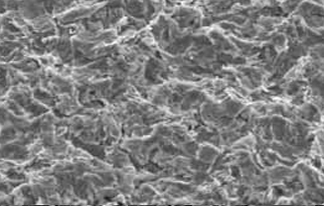 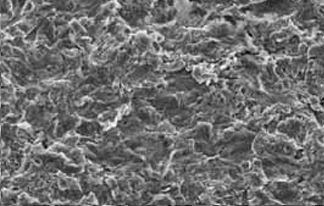 As the length of contact between DUOTex®-treated implants and biological tissue exceeds 30 days, tests for cytotoxicity were conducted according to applicable standards. The test for cytotoxicity was performed both with untreated implant blanks as well as with DUOTex®-treated implants. The in-vitro cell toxicity test was performed on mouse fibroblast cells in accordance with DIN ISO 10993-5 (DIN EN 30993-5) guidelines. No morphological changes or cytoplasmic damages to the cell were detected, and there was no biological-toxicological damage to the test cells. Accordingly, the DUOTex® surface meets the requirements for biological compatibility in-vitro and is classified as non-toxic within the parameters of DIN ISO 10993-5 {21}.

No new animal studies were conducted as the DUOTex® surface treatment was studied extensively in clinical trials and titanium is an established biocompatible material widely used in the field of implantology.

93,000 DUOTex®-treated implants have entered the market between 2008 and 2014, with no negative feedback in that time frame from the end user. The DUOTex® surface has proven itself as an outstanding option in a variety of surgical scenarios, including immediate loading, immediate restorations and delayed restorations with conventional submerged healing. 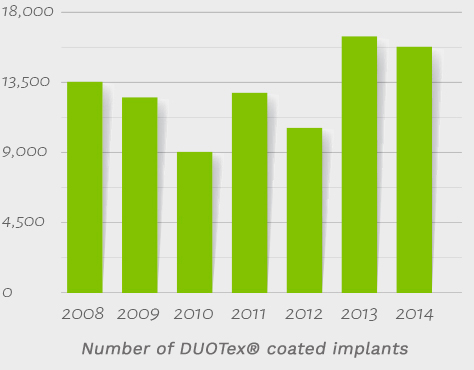 In summary, it has been demonstrated that the surface architecture of an implant has a profound and lasting effect on surgical outcome and healing. The unique properties of the subtractive DUOTex® implant surface allow for a biocompatible anchor that supports the proliferation of osteogenic cells, high resistance to tension and shear forces and sustained connection and osseointegration with surrounding bone.